Where Is Tornado Alley?

Across the United States, certain regions are more prone to severe weather patterns than others. One common example of this is an area known as “Tornado Alley.” This large, central section of the United States includes parts of the Great Plains, Midwest, and Southeast where tornadoes are more likely to occur.

While the term “Tornado Alley” is not officially used by the National Weather Service or the National Oceanic and Atmospheric Administration, it has been used for the better part of a century. 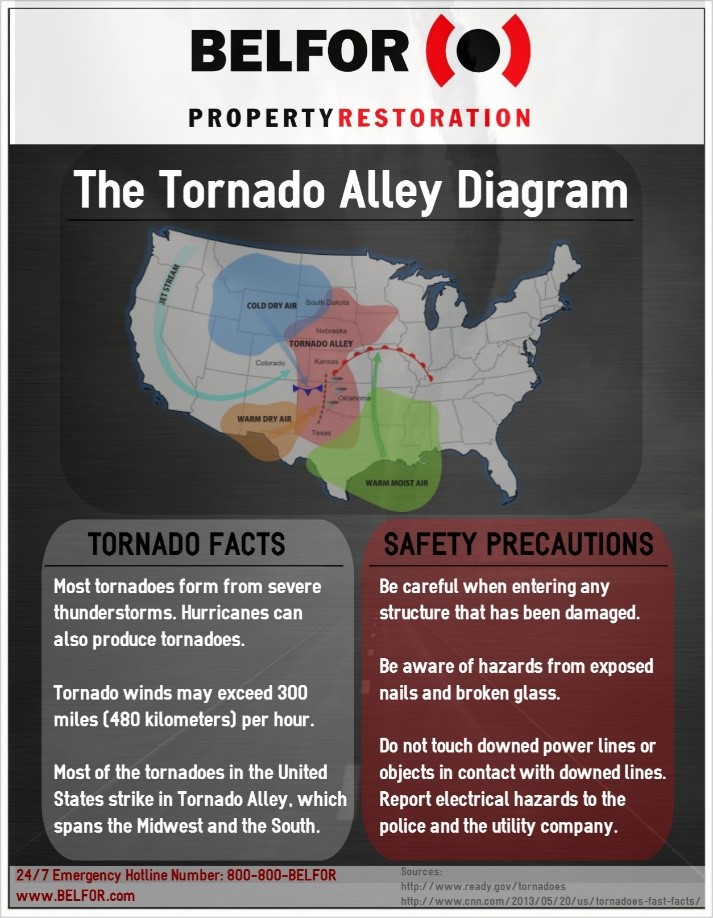 What Is Tornado Alley?

Tornado Alley is the section of the United States where, historically, the most tornadoes have occurred.

Please keep in mind that any tornado—no matter its class or location—should be considered a severe weather pattern that is capable of causing harm and destruction.

Furthermore, even though states located within Tornado Alley are more likely to experience tornadoes as compared to other regions of the country, tornadoes can form anywhere in the United States. Please refer to our tornado preparedness guide so that you can be prepared should a tornado watch or warning be issued in your area.

Where Is Tornado Alley?

While it has no set boundaries, states typically considered to be located within Tornado Alley include:

Tornadoes in these states historically form over the flat plains, but they are known to travel into densely populated areas, leaving a trail of destruction in their wake.

In addition to the states mentioned above, the southern states of Mississippi, Alabama, and Tennessee have seen a significant increase in tornadoes over the last several years. This specific sub-section of Tornado Alley is often referred to as Dixie Alley.

Some experts believe any states east of the continental divide could see extensive tornado activity due to the ideal weather conditions for tornados found in these areas.

Because Tornado Alley covers such a large area of the country, not every section experiences increased tornado activity at the same time. Tornado season in each of the various regions is as follows:

Why Tornado Alley Is Prone To Tornadoes

There are several factors that contribute to both the volume and intensity of the tornadoes that form within Tornado Alley. These include:

Atmospheric instability - Due to its geographic location and conditions, Tornado Alley has warm, moist air coming north from the Gulf of Mexico, which then collides with cooler, dry air coming south from the Rocky Mountains.

Competing air masses - When this collision occurs, the warm air rises while the cold air sinks, resulting in violent thunderstorms known as supercells. If the colliding air streams have different speeds, a funnel cloud is created.

Terrain – The dry and flat terrain found within Tornado Alley makes it easy for the supercell’s funnel cloud to touch down on earth. When it does make contact with the earth, a tornado is formed.

If your property is damaged by a tornado, it is important to act quickly to limit further damage. Even after a tornado has passed, your property could still be susceptible to water damage and subsequent mold damage.

At BELFOR, in addition to standard water damage and mold remediation, our storm cleanup and recovery services also include:

Contact your local BELFOR office today or download the BELFOR Mobile App to request storm cleanup and recovery services for your property.