BELFOR Knoxville helped the City of Knoxville and the Jewish Alliance with an important historical event. BELFOR volunteered to install a historical marker near the East Tennessee History Building to commemorate the life and bravery of Roddie Edmonds.

In 1945, a group of men captured by the Germans was being held at Stalag IX. Among the prisoners was 25‐year‐old Master Sargent Roddie Edmonds. A German officer ordered Roddie to point out the Jewish men in the group. He refused, ordering all 1,275 of his men, to fall out. He declared, “We are all Jews here.” The German officer backed down. Roddie’s actions saved over 200 soldiers from persecution. 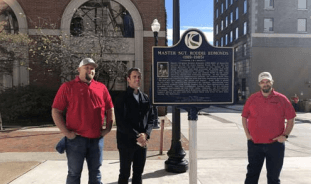 Restoring homes, businesses and industrial properties after man-made or natural disasters is what we do best. We repair and rebuild damages caused by fire, water, mold, storms and more.

In an area known for severe weather patterns, BELFOR Knoxville stands ready to respond 24-hours a day, 365-days a year. We have successfully helped private and commercial clients rebuild after storm damage in the area. We have also provided water damage cleanup and flood restoration services for many downtown Knoxville properties, universities and the local correctional facility.

It is important to us to give back to the communities where we live, work and play. We are actively involved in several professional organizations such as:

BELFOR Knoxville is proud to have received the Vendor of the Year award by the local Building Owners and Managers Association (BOMA).

We are also proud to be a certified Institute of Inspection, Cleaning and Restoration (IICRC) firm.