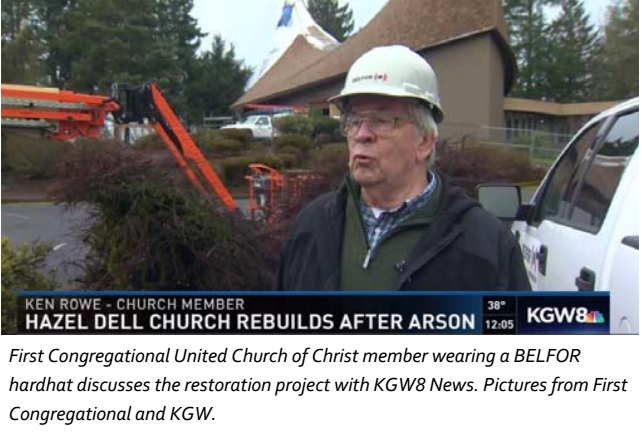 BELFOR Portland strives for excellence on every job. It has received perfect marks for customer service on the Contractor Connection Northwest District Contractor Performance Report for the states of Washington, Oregon, Idaho, Montana and Wyoming, and has recognized for its professionalism by Talk of the Town

Team BELFOR, aka the “Ash Avengers,” raised funds for the Wounded Warrier project by participating in the Oregon Tough Mudder event, an 11-mile obstacle course designed by British Special Forces.

BELFOR Portland sponsored "Fire Fit Kids" day at the Lake Oswego Fire Department. More than 100 kids between the ages of five to 18, and their parents, attended the event which promoted fitness and fire safety by working out with a local firefighter. Katie Miller from the Portland office was a featured speaker and an obstacle course leader for the First Alarm Group (ages 5-8). The event was a fun-filled community day with an educational message about fire safety.

BELFOR Portland is proud to be a House Sponsor in Washington County of Rebuilding Together, the nation’s leading nonprofit working to preserve affordable homeownership and revitalize communities. BELFOR has been involved with the organization for eight years.

The BELFOR Portland team worked on projects that helped retirees and veterans of the U.S. Armed Forces. They provided free repairs to homes, installed handicap accessible bathroom hardware, and replaced single-pane windows that had allowed moisture and mildew inside the home.

BELFOR Oregon is a proud Gold Sponsor of OSHE, the Oregon Society for Healthcare Engineering.

The First Congregational United Church of Christ is a pillar in the Vancouver, Washington community. Built in 1961, the building is distinguished from others with its 105-foot tall steeple, sweeping roofline shaped like the bottom of a boat, intricate stained glass skylight, and an iconic cross that can be seen for miles. An early morning fire believed to be set by an arsonist destroyed the inside of the church, including historic stained glass windows and the sanctuary.

BELFOR Portland rebuilt the church and restored the faith of the congregation. BELFOR were also able to remove and save precious items from the most heavily affected areas, including documents dating back to the 1800’s.  Read More