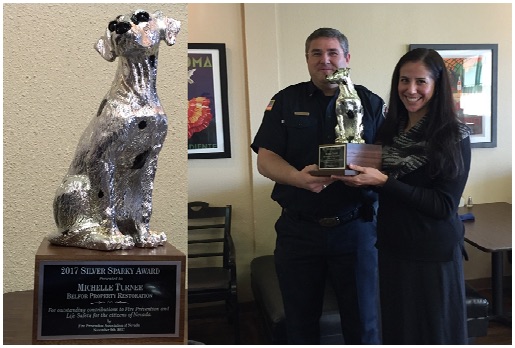 BELFOR Reno’s Michelle Turner was awarded the highest civilian honor from the Fire Prevention Association of Nevada (FPAN): The Silver Sparky Award.
During the holiday season, Michelle worked with the fire department to promote Christmas tree safety. The Fire Marshal wrote, "I wanted to thank you and BELFOR for providing the burn cells. Michelle was a critical component in having this be a successful event. Michelle is a tireless advocate of fire safety and represents BELFOR in a commendable way.” 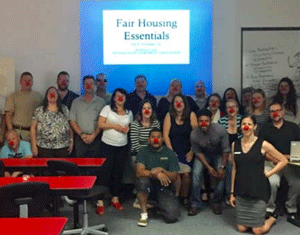 BELFOR Reno’s Michelle Turner (kneeling lower right) joined the Nevada State Apartment Association in celebrating Red Nose Day. Everyone donated money by purchasing their nose, then during the Fair Housing Class, they put on their noses for the serious cause of ending child poverty.

BELFOR provides emergency restoration and reconstruction services to the Truckee Meadows and all of Northern Nevada and Lake Tahoe.

Rapid response with comprehensive mitigation and reconstruction services has made BELFOR the disaster recovery company of choice for homeowners, governments, corporations, businesses, educational facilities, hotels, school, and other property owners. BELFOR has successfully completed many thousands of restoration projects in Reno, Sparks, Carson City, Fernley, Fallon, Lake Tahoe, Gardnerville, Minden, and all of Northern Nevada and Northeastern California, as well as sending technicians and equipment to aid in the clean up efforts of Hurricane Sandy, the Michigan Floods, West Coast Wildfires, Ohio and Tennessee floods, and Hurricane Irene, and many more.

All of BELFOR’s local managers are Reno natives and the office stays very involved in our community, volunteering for great local organizations like RIMS, Northern Nevada Claims Association, Community Associations Institute, National Apartment Association, and the Boy Scouts of America, to name just a few.

BELFOR Reno Restores Faith and Hope To Many

BELFOR Reno team members have played a major role in the clean up of every major disaster in Reno for over 25 years including the major floods of 1986, the News Year’s Flood of 1997, flooding in 2008, the Caughlin Ranch and Washoe Drive Wildfires, Wells Earthquakes, and 2017 Floods.

A victim of the Caughlin Ranch fires in wrote this kind letter to the Reno BELFOR team:

“Our house was affected by the recent Caughlin fire in Reno. When visiting a friend whose house on Starr Meadows Loop burned down completely, we met Chris from BELFOR who was there to help her out. He gave us his business card, and soon thereafter we hired BELFOR as our post-fire damage cleanup team.

Having never been through anything like this before, and as new homeowners, we were devastated at the damage, although minor in comparison to many. We didn't really know what to expect from BELFOR, but Chris worked with our insurance company to get going right away. The fire was in the early hours of Friday morning. We met with Chris Saturday afternoon. By Tuesday when we got home from work, BELFOR's crew had cleaned our house and garage top to bottom. No smoke odor, no ash residue. The outside of the house was power washed and the windows sparkled. Every item in our home and garage -- EVERY ITEM -- was clean and odor free.

You exceeded every expectation we could have had. We'd like to especially thank Daniell Brubaker who did such an amazing job, and who was a great communicator throughout the entire process. Also, Ben was there when we got home and he was polite, professional and very knowledgeable. He made us feel really good about BELFOR. Everyone we met from BELFOR was kind and thoughtful and incredibly professional. Thank you all so much.

By the way, our neighbors, who used a different company, are still sleeping in a hotel due to the smoke/ash; and the company they hired still have not done nearly as thorough a job as BELFOR did in one day. It's amazing the difference we see.

We managed to have a pleasant Thanksgiving thanks to you and your team. We know you worked through the holiday, and we are so impressed with your dedication.

Thank you again. We look forward to working with you for the completion of the projects approved by our insurance company. We are lucky to have BELFOR in Reno.”

BELFOR Reno provided free water mitigation services to a family in Reno whose young son is battling leukemia.  After a pipe burst under the home and flooded the crawl space, the family knew they needed professional help but was concerned about the costs for those services. They contacted the Northern Nevada Children's Cancer Foundation (NNCCF) who put them in touch with BELFOR. Ben from BELFOR Reno initially assessed the damage, performed the work, came back several times to check on moisture readings, and finally removed the equipment. In an email, the family wrote: "

Ben came over at about 5:30 - went under the house and immediately found the problem. Ben said he would get something scheduled for today or tomorrow. As he was leaving he asked us how our son was doing ... I wanted to take a moment and express our gratitude for your time, effort and kindness ... I was up late into the night wondering how I could repay you for your generosity.”

BELFOR Reno and Lake Tahoe have been busy helping clients recover from a relentless succession of storms this winter. The atmospheric river has caused roof collapses and overwhelmed drainage systems, resulting in interior water intrusion that has soaked everything in its path.

NVSAA Business Partner of the Year

BELFOR Northern Nevada is the recipient of the prestigious Business Partner of the Year at The 3rd Annual Nevada State Apartment Association (NVSAA) Reno Jewel Awards. The NVSAA Jewel Awards are the most honored awards given in recognition of superior contributions and exemplary achievements in the multifamily housing industry. The Jewel Awards are regionally awarded and these magical individuals, properties and companies are recognized for Northern Nevada.